Do I really need to clarify? Apparently yes. OK here it is: rape is not funny. ever.

I was at this lovely little free comedy show at a dive bar in Lakeview one night, enjoying my night and pissing away my nonprofit salary on craft beer, when a comedian opened her act with this doosy: “There should really be rape days at work; like vacation days but after a rape.”

I wanted to find the humor or perhaps wry commentary on society in this joke, but instead I just ended up concluding that it was a stupid attention getting stunt meant to illicit uncomfortable laughter (which it did). In all honesty I give the comedian some leeway because she is a woman and therefore not as funny as a man so she had to resort to the easy punch line.

But where I simply can’t find the wiggle room is how a man thought telling a story about RAPING a drunk woman was funny. But apparently ex-Second City cook Eric didn’t get the don’t be a fucking rapist memo.

I’ll admit it; I’ve been a bit of a P.C. freak in the past but in my elder years I’ve come to appreciate the slightly off colored jokes especially when they involve dead babies. However I will never understand why Eric thought that forcing his way into a unwilling woman’s room, getting on top of said intoxicated women and “doing his work” would ever be considered humorous.

I could get into the particulars of Eric’s pathetic story such as his perceived “peer pressure” and his idea of the “fish hook” as foreplay, but honestly I think I’ve said it all when I say Eric D Angell you will never have sex again.

Women can run the world but to the RedEye, they are still just girls

Forbes released its list of the world’s most powerful women. I know, we were all waiting with baited breath. The list may not mean much but how the media chooses to report on it does.

For example the RedEye chose this doozy of a headliner “Run the world (girls)”.

The header is a play off of Beyone’s newest hit but it also is widely ridiculous. These women have not been considered “girls” for years and decades in some cases. Actually the RedEye conveniently put all of their ages so you can determine for yourself just how many years these powerful women have been just that women and not girls.

The article was also kind enough to note that 22 of the women are single. You know in case you are looking to hook up that single friend of yours.

Obviously the RedEye was not trying to be malicious. It was probably attempting to be humorous or at least catchy and kitschy. But in the end it just fell into the trap of attempting to minimize the most powerful women in the world by associating them with prepubescent children and Beyonce (no offense to Beyonce).

I think a good lesson for us all to learn on this one is let’s not lose what little integrity we have left with attempts at cute headlines.

Give Your Voice a Choice Event: 8/25 Heartland Cafe

I’m MCing an awesome event tomorrow night called Give Your Voice a Choice. Mostly as a shameless plug for the event but also because I think it’s worth sharing, I’ve included my introduction and my story of choice below. The event is 6 to 9 at Heartland Cafe and more deets can be found here: http://www.facebook.com/event.php?eid=106511572779697 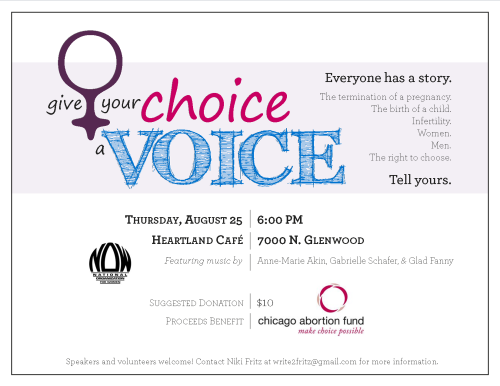 “The event tonight is about choice. Not just choice as it is defined redundantly in the media in the battle over abortion, but the broader choices everyone faces when dealing with reproduction. From deciding to tie your tubes at 30 to deciding to have a child at 40 to deciding to end an unplanned pregnancy, from abstinence to monogamy to the Kama sutra, from condoms to IEDs to that weird ring thing, we all make choices regarding our reproduction. Yet we often feel alone in our struggles, dilemmas and ultimate choices.

The Chicago Chapter of the National Organization of Women is thrilled to bring together members of the community as well as local musicians to talk about choice and bring together our voices.

We would like to thank everyone who contributed at the door. If you would still like to contribute please feel free to come up to the table and pick up a brochure and make a contribution. All the proceeds tonight will go to benefit the Chicago Abortion Fund, who provides financial assistance to low-income women wishing to end their unplanned pregnancies. You can read more about the fund including their participants’ stories at www.chicagoabortionfund.com.

We would also like to thank our three musicians tonight who will be donating their time and talent including Anne-Marie Akin, Gabrielle Schafer, & Glad Fanny. They also have CDS and merchandise for sale at the table.

Also we would like to give a big thank you to all of our speakers who agreed to share their stories.  We are lucky enough tonight to have Terry Cosgrove from Planned Parenthood as well as Representative Kelly Cassidy here, as well as many other members of the community. If you have not already signed up to tell a story but wish to do so, there is a sign up sheet at the table and there will be time in the middle of the event for volunteer speakers.

To kick off the night, I’m going to share some facts and figures with you.

After sitting on my shelf for more than a year, I am finally reading “Half the Sky.”

The book gives quite a few scary facts about the state of women in the 21st century especially regarding maternal health.

Some of the most shocking to me were that there is one maternal death every minute and for every death at least ten other women suffer significant injuries such as fistulas or serious tearing.

Additionally unsafe abortions cause the deaths of seventy thousand women annually and cause serious injuries to another 5 million. Five Million Women.

That is big number. So large in fact that we tend to not be able to grasp it and it rolls into our heads with all the other horrible atrocities of the 21st century.

Scientists have proven that facts, numbers and “objective” figures when dealing with humanitarian issues don’t trigger our consciences or pull at our heartstrings. Stories do. Connecting with an individual story evokes the compassion needed for greater humanity in the world.

So with that in mind, I’m going to tell my story.

My senior year in college I went to study abroad in Argentina. I stayed with a middle-income family in a working-class barrio. They had a maid, I’ll call her Tia, who lived with them. During the day we would watch soap operas, eat little cookies and occasionally exchange our thoughts on the boludos on the screen. Our relationship was superficial and other than the fact that she was from the North part of the country and was relatively poor, I didn’t know much about her.

Then one day I came into the kitchen and Tia was crying. No not crying, but sobbing, shaking in  her shoulders as she washed dishes in the sink. Of course I asked her what was wrong but when she tried to explain with her northern accent and rapidly more desperate words, I couldn’t understand her. I patted her shoulder, and asked if I could do anything. She gave me a cup of coffee.

My host family later explained that Tia’s 16-year-old daughter, I’ll call her Maria, had run away with her motorcycle-riding 20 year old boyfriend. Tia blamed herself for not being there. But there was nothing she could do. Tia’s abusive ex-husband had custody of the children and all Tia could do was send the children some extra money for school supplies.

I left for the weekend to go on a trip to the beach. When I came back there was Maria, looking more morose than one would think possible of a 16 year old girl. She had bags under her eyes and walked slightly hunched. She did not talk to me and left the room anytime I came in.

My host family explained later. Maria had run away to get an illegal abortion. It had gone wrong. She couldn’t stop bleeding. They took out her uterus. She would never have children. The motorcycle-riding boyfriend was no where in sight. Maria’s father did not want her back in his house.

Before I left I gave her my hair dryer and black converses. I didn’t know what else I could say or do that would somehow lessen the hurt of what had happened and how her life would never be the same.

When I got back to the states I went to visit my family and catch up with life from the past year. I was chatting with my cousin, when she told me she had had an abortion while I was gone. It was an unplanned pregnancy. She found out when she was only a few weeks pregnant. She took a pill and continued her 2nd year of nursing school. She graduates this May.

When I asked her if I could share her story she said sure but she also said “There’s not much to share. I don’t really think about it ever. Maybe that is offensive to some people. But it just isn’t a part of my life.”

When we were talking about creating this event 9 months ago, we were all surprised and comforted by the similarities we had in our stories. We wanted to share this comfort and connection with a larger community by sharing our stories. Thank you for joining us tonight and enjoy the event.”

Filed under Events in Chicago, Her Story

Besides being nonsensical Beyonce’s “Girls Run the World” is clearly not accurate. Women in fact do not run the world: less than 20% of heads of states are female. Apparently Beyonce’s version of “running the world” is owning the dance floor.

Boy don’t even try to touch this
Boy this beat is crazy
This is how they made me
Houston, Texas baby
This goes out to all my girls
That’s in the club rocking the latest
Who will buy it for themselves and get more money later

But I think no one critique it better than this amazing young feminist.